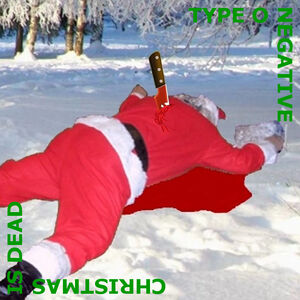 Christmas Is Dead is the name given to the imaginary Christmas-themed Type O Negative album. The album has 12 tracks (whence 12 Days of Christmas), all of those songs were made up except for "Red Water (Christmas Mourning)", which is on October Rust, and "Last Christmas", which was uploaded to YouTube under the band name StereoType O Negative.

The album meshes gloomy gothic-doom riffs of TON with sounds and melodies of Christmas, like jingles, bells, chimes and other sounds produced by keyboards. The last and title track "Christmas Is Dead" is especially a really sorrowful one.

Links to other albums

Retrieved from "https://typeonegative.fandom.com/wiki/Christmas_Is_Dead?oldid=1563"
Community content is available under CC-BY-SA unless otherwise noted.