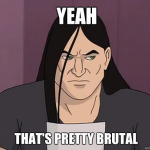 Although he is alive in our hearts, He sadly died April 14, 2010, due to heart failure

Green
Peter Steele (January 4, 1962 - April 14, 2010) was the lead vocalist, bassist, and songwriter for Type O Negative. (I wonder if all 4 members of TON had O- as their blood type). He was born in the Red Hook neighborhood of Brooklyn, New York, and his real name was Petrus Thomas Ratajczyc. Steele is also known as "the Green Man" because when he worked for the parks dept., He wore a green uniform and drove a green garbage truck. he was known by that by people as well as Type O fans. And green is his favorite color and is the reason green is the theme color for the band (As well as black).

Peter was and is known for a lot of things including his vampiric effect, Towering height, (Peter stood at a whopping 6 foot 8 inches), velvety bass-baritone vocals, and a self-deprecating, dark sense of humor. His lyrics were often intensely personal, Dealing with subjects including love, death, heartbreak, and addiction. He credited both Black Sabbath and the Beatles as key musical influences.

The next year, Type O's landmark album, Bloody Kisses, was released. The album focused primarily on romance, love, sex, and death. In 1996 Type O released October Rust, which features more multi-layered and melodic sound than its predecessor, though it retained similar lyrical themes. One of its tracks, "Green Man", is an ode to his nickname.

Their sixth album, Life Is Killing Me, was released in 2003. The album features two songs about his deceased parents—"Nettie" about his mother Nettie and "Todd's Ship Gods (Above All Things)" is about his father. Another track, "How Could She?", lists all of his favorite female television characters.

On April 14, 2010 Peter Steele died reportedly of heart failure at the age of just 48. A further autopsy revealed that he died from an aortic aneurysm, which is abnormal enlargement of the aorta. Prior to his death, Steele was preparing to write and record a new Type O Negative album. In November 2010, the remaining members of Type O Negative decided to dissolve the band rather than looking for somebody to replace Steele, with Johnny Kelly stating "Even if there is somebody who could take his place it wouldn't matter. We don't have any interest in continuing. It's impossible – it hasn't even come up in any kind of discussion. When Peter died, Type O Negative died with him."

Retrieved from "https://typeonegative.fandom.com/wiki/User:Lady_Dethklok?oldid=1641"
Community content is available under CC-BY-SA unless otherwise noted.